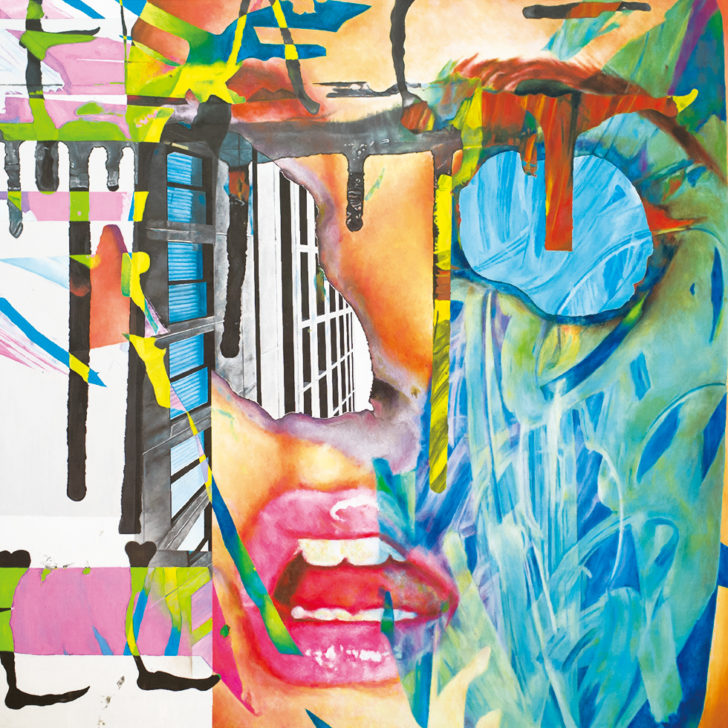 The artist, MA, born as a homo sapiens, has evolved for the last 33 years. As a descendant of homo sapiens, born 200,000 ago in east Africa, what he exclusively adopts as the basic subject of his art is concepts such as “Tokyo”, “capitalism” and “humanity”. In 2018 in Japan such subjects are seen as indispensable in any social phenomena occurring the “now” and the “here”, however, although they are historical accidents, they are presented as “universal” to function as unspoken rules of people. Or they force the subject to submit hoping all the subjects, servants, to want them actively. Because of the evil of such an object, cowardly artists, which mean general artists, stay away from it. We never know whether MA decides it an evil as his personal taste. Anyway, he objectifies the ideas and answers the radical question of “What’s going on in this world?” by putting the current structure into a diagram to actualise in a supporting body, a painting. He transforms a rough sketch of the complexities of modern world’s desires into a beautiful arrangement. The true nature of the social looms in the diagram of desires. That is to paint the fight of powers, resistance, frictions, chaos with nuanced lines, colours, angles, orders and relevance, but isn’t it what painting were all about in the first place? Good paintings expose fights of desires, that is to say, breaking away, descending and hardening. In the modern world, they are the capital, humans and local politics. Natural-born geniuses who are not restrained by those subjects should wait for a wonder in a desert island. The main artwork of this exhibition, the latest series “The Reconstruction of Identity (2017-2018)” repeat “deconstruction” and “construction” to cast the ceaselessly transforming city of Tokyo to a recipient of plastic surgeries. Body (city) and content of the subject, the identity as a container become reciprocal and body (city) can be an opportunity to change the identity of a plastic surgery recipient. Needless to say, the inversions happen on a daily basis. As the subject is affected by the object, vis versa, the object is influenced and transformed by the subject. A woman who received a plastic surgery done body (city) says “I’ve become a happier person” nonchalantly in a beautifully collaged face. Number of disharmonies such as “the wiggles of cells composing the inner world of a body” born in the process of reconstruction of identity and its music’s evil quality rather mesmerises the listener to be irresistible, all of which lead to a presentation of torn desires. In the paintings of desolate buildings left by the burst of bubble economy in the series “UNCLEAR COLLAPE” (2016) and 20 paintings focused on consumption, media ads, inorganic city and people “SPECIAL CAPITAL” (2013-2015), you will see the consistency of the artist’s concept which dominates the “now” and the “here”, “quasi-universality”.

The artwork of MA is a warning to unconsciously being bound to values rules by the society of us homo sapiens. It’s an agitated provocation to us with phrases such as “burst of shallow and ugly evilness”, “you like this sort of thing?”, “you will get helpless although you know it’s bullshit”, “that’s a scheme too, not necessarily a bad one”. We don’t need any more of “different interpretations by viewers”, they just represent the failure of the past. MA urges you to choose. There are no options. One question. Will you buy options or will you transform options to living things?

[Reviewed and Edited by Etsuo Nagura(ENDON)]
[ Translated by Naoko Umetsu]

MA was born in 1985 in Japan and lives in Tokyo.Since his first solo exhibition opened on 24 Feb 2012, “BORN IN JAPAN” with the statement “F*** you, I won’t do what you tell me”, he has worked both in Japan and abroad. Recently, he has been painting with a focus on the consistent themes, “Tokyo”, “capitalism” and “humanity”, never restrained by so-called “genre” or “style”, he expands the scope of expressions and deepens it.